The first synthetic comic book co-created with emerging AI, Fastwalkers is a nonlinear meditation on deep learning that celebrates the unexpected poetics of generative computing and explores its potential to form new reader sensibilities.

Born out of Manouach’s ongoing experimentation with the informational abundance and affective economies of comics, Fastwalkers is a wildly vibrant hallucinogenic book in which all text and images have been produced with machine learning.

Since its beginnings in the late 19th century the comics industry has expanded symbiotically alongside the development of printing, distribution, and communication technologies. As a highly digitized medium with active online communities, comics lend themselves to the programmatic processes that define machine learning and today, synthetic processes are reshaping how we produce, consume, archive and understand all media, including comics. The comic was developed through interdisciplinary teamwork within the Nvidia Inception Accelerator program consisting of computer scientists and designers using the latest generative algorithms in AI such as GAN and GPT-3. Its models are trained on Anime and Hentai imagery and as a whole the book is an amalgamation of different community datasets, proprietary algorithms, indexing regimes, beta testing, and generative models.
The result is a semantic landscape of ambient layers whose harmonies and dissonances reveal the aggregate nature of knowledge exchange in the semiocapitalist age and illuminate the inherent computational qualities of comics to play with the latent space lurking in the reader’s cognition. 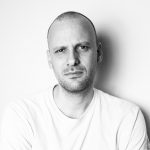